Conference for the launch of the research study

“Positive aspects of migration: Roma women as agents of change”

(Closing event of the project financed by the EEA Grants)

Liviu Iancu, BA and MA in History from the University of Bucharest; is preparing a PhD in international relations and migration in ancient times (conducted the research study)

Petre Matei, historian PhD thesis: Gypsies in Romania in the first half of the twentieth century. Identity and Otherness

Carmen George, President of E-Romnja Association, organization that aims at promoting the rights of Roma women.

Oana Roșca, The service, programs and relations with civil society and international organizations within the Department for Interethnic Relations, The Romanian Government.

Between November 2014 and December 2015 Eurocentrica Association has implemented, the project “Positive Aspects of Migration: Roma Women and Roma Craftsmen as Agents of Change”. The project PA17RO13LP4 / 11.27.2014 has been funded under the program PA17 / RO13, The Promotion of Diversity in Culture and Art within the European Cultural Heritage through a grant from Norway, Iceland, Liechtenstein and the Romanian Government.

Within the project it was conducted the research study, “Positive Aspects of Migration: Roma Women as Agents of Change”. Among its main conclusions the study puts forward that “Roma women’s status under the influence of migration, has developed and has contributed to their emancipation through the reduction of domestic violence, employment in activities similar to those practiced by men. Moreover, migration has determined an increased participation of women in decision-making in matters of family interest. The borderline cases where the woman in the family must fill the role performed traditionally the man i.e. income generator are the most effective in defeating the resistance to change; a resistance that is maintained not only by some men, but also by the majority of the older women.”

The research study was published as a booklet in English, Romanian and Norwegian.

Within the project two Roma Crafts Festivals were organized in Oslo and in Fredrikstad on 19th and 20th September 2015. The festivals, with nearly 500 people attendants, consisted in handcrafts objects and photos exhibitions and a presentation of the research study.

The overall objective of the project:

To enhance cultural dialogue and to preserve European identity through the understanding of cultural diversity by promoting positive aspects of Roma migration (Roma women and craftsmen as agents of change).

Specific objectives of the project:

· To document the cultural history of Roma and to determine a better understanding of cultural diversity by conducting a research study on the positive impact of migration for the emancipation of Roma women;

· To determine a better understanding of cultural diversity and to consolidate the intercultural dialogue by promoting the traditional Roma crafts through two events organized in Norway;

· To consolidate the access of a larger audience to Roma culture by disseminating the research study and by organizing two events in Norway focused on traditional Roma crafts; 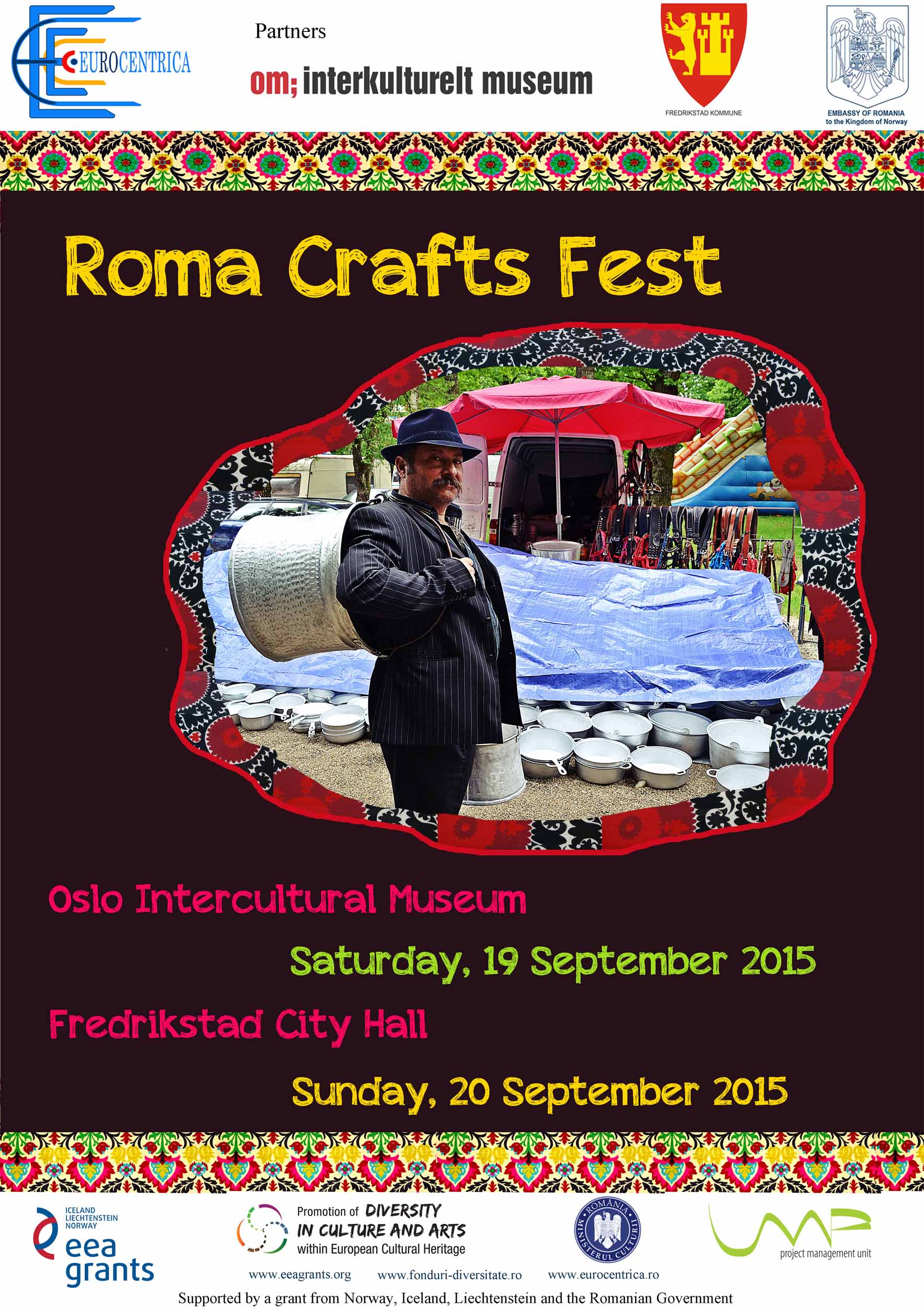