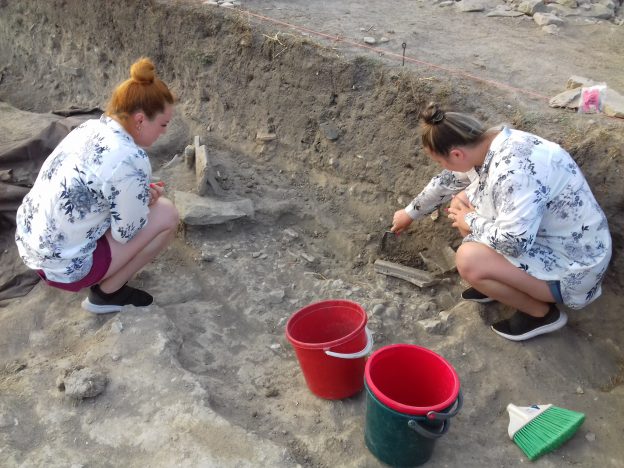 Two students from Cahul, volunteering for Eurocentrica, gave help to the archaeological research at the ancient city of Histria

The Association Eurocentrica identified and supported two young volunteers to take part in the last two weeks of the archaeological excavations conducted between 16 July – 14 August on the Plateau of the ancient city of Histria by an international team led by Professor Adam Rabinowitz from the University of Texas, which conducts its research in partnership with ”Vasile Pârvan” Institute of Archaeology from Bucharest. The action is part of Eurocentrica’s project “Support for the archaeological research at the ancient city of Histria 2019”, sponsored by Trident Pharma Ltd. from Romania.

The two volunteers are Victoria and Nicoleta Manalachi, students at “Bogdan Petriceicu Hasdeu” State University of Cahul, Republic of Moldova. They provided valuable support to the researchers and developed at the same time several skills specific to archaeological work: identification of artifacts, archaeological drawing, the fundamentals of using a total station. For their activity, the two students will be awarded Voluntpass volunteering certificates, recognized in the EU.

The participation of the two students was also made possible by the administrative support given by the mayor of Cahul, Nicolae Dandiș, and the pro-rector of the University of Cahul, Ion Ghelețchi.

More information on the archaeological research undertaken since 2018 on the Plateau of the ancient city of Histria are available on the University of Texas website.

The Association Eurocentrica thanks the two volunteers for the wonderful activity they carried out at Histria!